Playout 1.0, a Game for COVID times 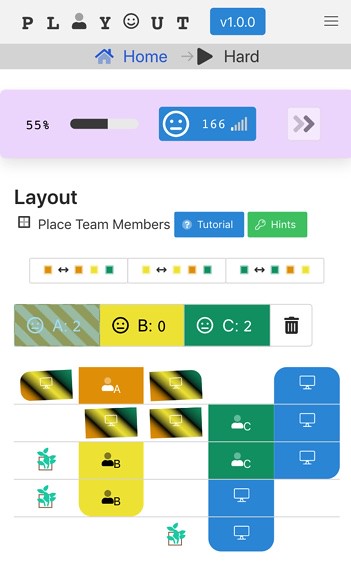 TLDR: I've made a game: Playout. Please DM any feedback or feature requests!

The germ of this idea came from teams moving around at Skyscanner. Eva is an office manager there and often had to manually work out where to place teams when there was an office rearrangement. She had to take into account many preferences and constraints. Iva (a colleague) and I both thought this was something where a computer could be a helper, perhaps representing the task as a Constraint Satisfaction (CS) problem.

There wasn't much spare time to take it further. However, this Summer I went down to four days a week at Skyscanner as part of a temporary COVID money saving plan. So, I thought I'd focus some of my new spare time on seeing if this was do-able.

Iva had given me some pointers on how to represent this as a CS problem, but I was still far from familiar with the practicalities of CS. So, I split it: learn about the domain (make a game) and learn about CS (take a course on it).

Playout is my "toy" version of the problem which I made into a standalone game, because that sounded fun :-)

The core look-and-feel hasn't changed all that much over time, but the internals and explanations repeatedly changed based on feedback from friends and family. There are still tonnes of things to add, but you have to draw a line somewhere, and 33 releases later, 1.0 is it!

Next steps are to integrate what I've learned about CS back into the game, and also gather ideas/bug-fixes/suggestions from people playing the game. So, please have a go at it and let me know!.